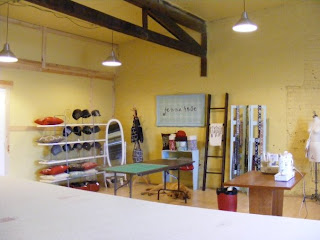 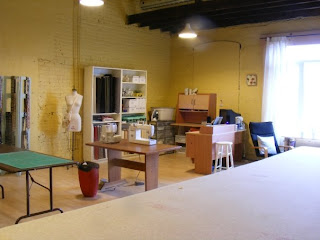 another of the great things about living in ontario again is that many of my crafty friends live here, and have studios that i can visit.  on saturday i went to hamilton to visit jenna greenberg.  we had plans to check out a craft show at the convention centre, a craft show that we couldn't find as it had been canceled, and nobody seemed to know anything about it!  we had both been solicited via e-mail to participate in the show - which happens pretty often once your name is published on any craft show's website - and wanted to have a look at the show to see if it was something we'd be interested in...i don't think that we are.
above are two photos of jenna's studio in the sonic unyon building on wilson street.  hamilton seems to have a great revival of artists and studios going on - there is a monthly art crawl
that happens as well, that jenna takes part in, as wilson street is just off of james. 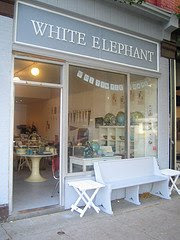 jenna then took me on a tour of some nifty hamilton shops.  we went to white elephant,
a lovely shop that sells vintage as well as canadian etsy seller's items, and is run by hollie and jane, who you can see here posing in the same nova scotia fisherman cut-out as ted and i. just down from white elephant is mixed media, a store that sells great quality art supplies along with papergoods, which are a weakness of mine. 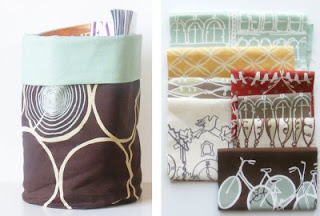 to celebrate the birthday of her business, jenna is doing givaways ever friday for the month of may over on her blog - leave a comment to enter!

How does anyone keep their studio so neat? Thanks for leading me to yet another wonderfully talented textile artist

It was great seeing you Roisin! You should visit more often.
The planter turned out lovely, thanks!
Also- my studio does not always look so clean- trust me. Of course I would only photograph it just after it has been cleaned up!

I love Jenna's stuff. I've been eyeing her bag/bucket things at Love, Me since they came in. I might be able to convince Mike that I can keep old mags if I have such a pretty place to keep them.

I've also heard of this White Elephant place...it is why I want to make a special visit Hamilton on my next trip to Southern Ontario (although Mike is not convinced that visits to Hamilton are a good idea).