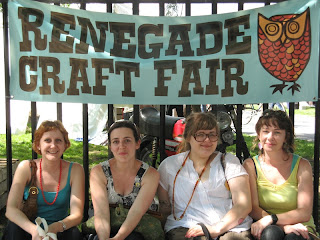 here is what i think is the only shot of the four of us that went on this crazy bus trip, taken by a very reluctant girl who would rather have been text messaging, or whatever she was doing. 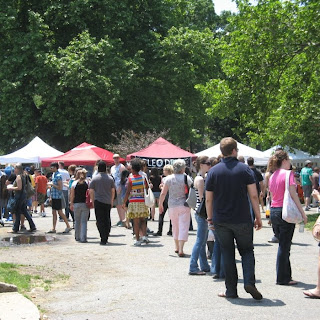 the renegade show in brooklyn had perfect weather to bring people out, it was about 25 degrees, and sunny.  we didn't see any posters on our trip over to brooklyn, but the show is very well attended, and we made a good few purchases ourselves. 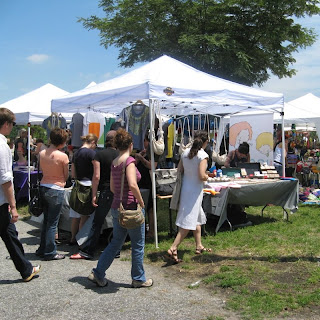 we stopped in to say hi to some fellow ontarians, serra from Hoibo and hoi-an from MeHoi.  i'm going to have to figure out all of the legalities of taking my work over the border in order to do shows like this one - something i find daunting.  mostly because of some terrible experiences with customs agents when i was a kid, and we went cross-border shopping [and wore four pairs of jeans home!]. 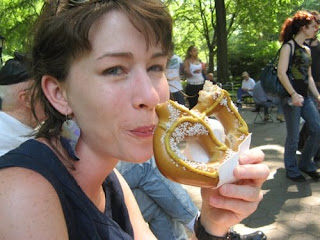 linda told me to eat a pretzel, and so i did [while making this face, apparently.  i'm going to blame it on all that salt].  i've decided that new york is wonderful for a number of reasons, and high up on my list is the fact that spicy dijon mustard is a condiment more common than boring yellow mustard.  i love dijon. 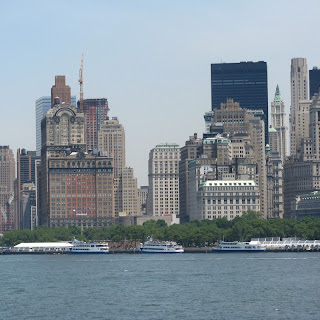 we tried to take the ferry over to the statue of liberty, as our touristy thing to do.  all of the tickets to go up the monument were sold out, so we decided to take the staten island ferry instead.  we didn't know when we got to the ferry docks that this ferry is free, and spent a while wandering around, trying to figure out where to pay, like good canadians.  we eventually asked a very nice security guard, who clearly gets that question a million times a day.  don't you just love all of this gracious architecture? 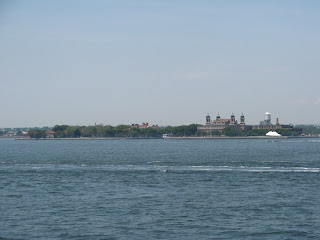 i had wanted to go to liberty island [where the statue is] as well as ellis island, to take photos for my mom and dad.  my parents are immigrants from ireland, and while the came directly to canada, there were an awful lot of irish who fled to america during the famine of 1840.  ellis island is where their ships landed, and the people went through immigration and customs.  being a sentimental bunch, the irish regard this place with a certain reverence. 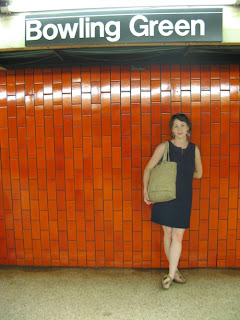 another of my favorite things about the city, and any city with a subway system, are the subway stations and the tile work in them. these fantastic orange tiles were in many of the stations at the southern end of manhatten, and were found horizontal, vertical, and diagonal.

I love your level of attentiveness to all the different pattern principles of subway tile work...lovely picture of you too ;)

I think the tiles in the Spadina station here in Toronto are similar. At least, in the tunnel from the east-west line to the north-south line...