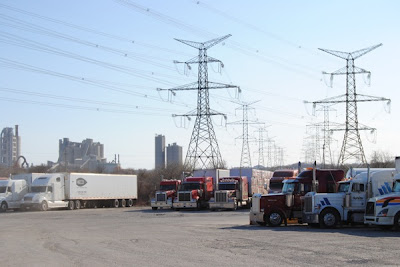 well, here is the long-overdue post about our drive to halifax and home again. we are good roadtrip-mates, ted and I - we both like to stop and eat at truckstops/diners/chipwagons, and we both like to sing loudly in the car. above, powerlines in ontario. near kingston, I think, at a truckstop. i'm always impressed with how the truck drivers can back their giant trucks up so neatly. 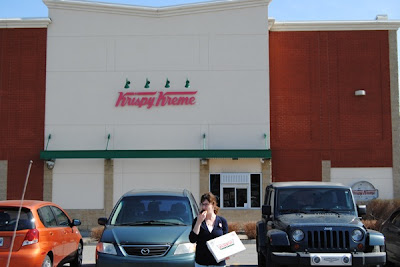 we stopped the first night in St. Berthierville, as we had a later start than we;d hoped on day one. after some of the worst coffee we;ve ever had, we searched for 'coffee' on the GPS [thanks, Wayne and Penny, what a great gift!], it found us a Krispy Kreme in Quebec City. as we drove around the off ramp, we noticed a loud, bad-sounding noise coming from the right front tire. after we got our donuts, we went in search of a mechanic, with my very limited french. after a frustrating stop at a Shell garage, the GPS directed us to the CAA [thanks, mom and dad- it was helpful!], which turned out to be a travel centre, but they spoke english. she found us a mechanic, who was lovely but too busy, so he found us another english-speaking mechanic, who was also lovley and fixed our bearings, and showed us the broken coil spring, leaking suspension, and thin brake pads. four hours later, we were back on the road. 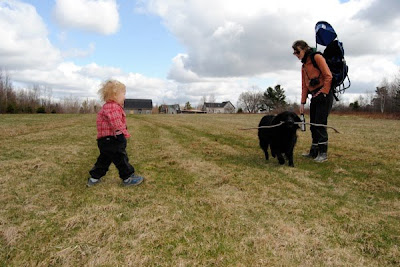 we made it very late in the evening to Little Ridge, new brunswick, the home of dear friends from Halifax Brenna and Joel, and their son Ezra. wonderful to be off the road, in the woods, and the relative quiet. two great days of walking, talking, eating [bear! shot on their property! that Brenna & I cooked!], peeping frogs, howling coyotes and shooting stars on a clear night. 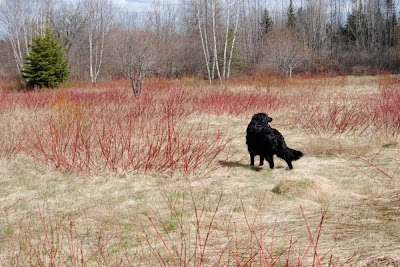 Zimi, a dog among the dogwood. this land had been cleared at one point, but the birch and dogwood have reclaimed it. I love the red of dogwood in the spring, before the green comes back. 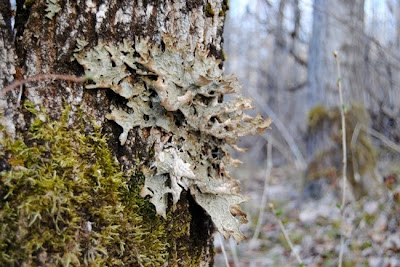 all kinds of lichen and mosses, growing everywhere. we went on an exploratory atv ride with joel, and he showed us various parts of their property, including an old well, the foundation of a former home, and where they are planning to have theri gardens, 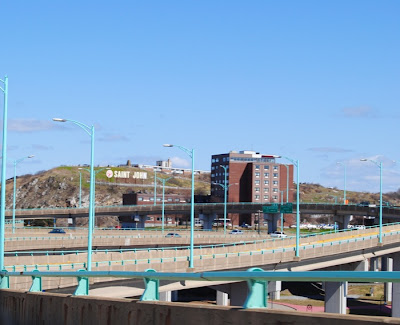 two nights later, we were on our way again, opting for the scenic route through saint john and along the fundy coast. I love how saint john chose a vibrant aqua blue to paint the metal bridge rails and lamp-posts.

A trip we have done many times minus the Ontario stretch. It's amazing how beautiful it is once you get off the highway. I find the highway part slightly tortuous. I always get a little grumpy once my coffee gets down graded. I had no idea a GPS could help with that. Just love your work. Would you mind if I posted some of your work on my blog? Thanks, Anna

anna - the gps is so wonderful, we had no idea when we were given it how useful it would be. please feel free to post about my work, I would love it.