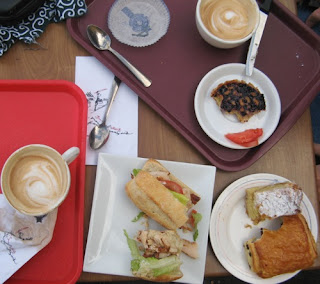 this is our very last breakfast in Montreal - a city we were very tempted to stay in for good. so many cafe au lait, so many croissants - so much food in general. there are very few photos from this mini vacation because our hands were constantly full of food. 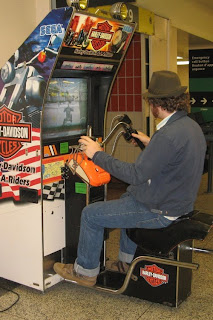 it was a bit of a disaster to start - we left london at 3 a.m. to drive to Toronto, to catch the train at 6 :30 a.m. because i have a tendency to worry, we left so early and arrived so early - this is Ted at 5:30 in the morning at Union Station playing the motorcycle ride-on video game, because there was nobody there but us.
we arrived in montreal to discover that the apartment i had booked and put a deposit on was a scam, and i was so tired i started to cry on the street, in front of the non-existent apartment we had just taken a cab to. saved by my best friend's little brother, we cabbed up to his house to sort ourselves out. 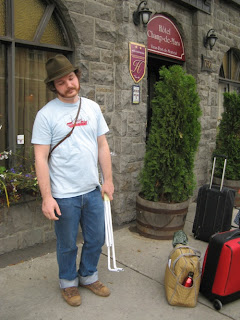 we ended up finding the great Hotel Champ-de-Mars, which is like a fancy Motel, really. it was well located [in the Old Port] and well priced, and clean. and it gave us continually fodder for laughter and jokes, as the room was horrifically decorated and involved hauling our bags up a spiral staircase. this is Ted after check-out, on our way to drop off our bags at the train station before heading up to Jean Talon Market, where we had the fabulous breakfast in the first picture. This is also what we both looked & felt like the morning after eating at Au Pied deCochon, by far the best meal either of us has ever had. we ended up staying at the restaurant until 1 a.m., and drinking bourbon with our server, and were so stuffed we couldn't sleep afterwards. 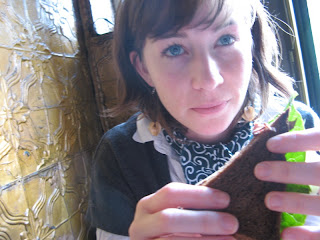 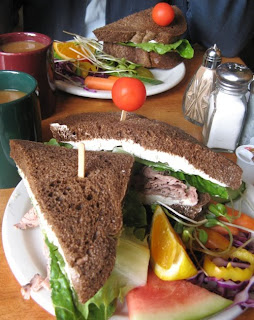 that last day, Monday, was spent running around trying to eat as much as we could. after breakfast at AU Pain D'Or in Jean Talon, we wandered back downtown to shop in fripieries [best word!] and eat as much as we could. we went to Fairmount Bagel, and sat on a sunny bench in front of a fire station eating fresh, hot bagels. then we went to Café Santropol, and had the gigantic sandwiches above [we saved half for the train ride home]. then we went to Schwartz's Deli, and this was all before 3 p.m. I thought we were going to burst from overeating, what a day!
i have no photos from the craft show we were to Montreal for, PucesPOP, but it was great. Becky over at the sweetie pie press remembered to take some photos of the show, which you can see here. as always, i met and traded work with a number of really lovely crafters, including Danielle from stitchface [she's from Toronto, but we met in Montreal], and coucou salut, who's real name escapes me. thanks for the lovely things.

I love how much you guys love food and how it is the most important and exciting thing about your trip to Montreal. awesome. you made me hungry for bagels and sandwiches and bourbon and Montreal.....

I agree with Rilla - wow! talk about food tourists.

I used to live right next to Fairmount Bagels... The best bagel shop E-V-E-R, and open 24hours too, so perfect for late night snack!
you and Ted seem to have gone to all my favourite spots. My roommates and I always ended up at Santropol for espressos too! We lived on St-Urbain.
Happy for you two. I'm incredibly jalous! (and "au pied de cochon" used to be just a deli in the good old days... I would kill, yes, kill, for anything to eat from there...) Did you make it to "Les vivres"?
Marie in Dinosaur