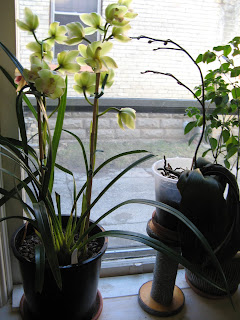 i won a phaelenopsis  orchid at the orchid society of halifax' annual show, way back in the spring of 2007.  it made the long drive from halifax to london, crammed somewhere in the depths of that very big truck.  it was in full bloom when i won it, and hasn't bloomed since.
i like to think that i have a green thumb,  but always manage to kill the orchids that i purchase.  i once was having moderate success with a pair that i bought at the orchid show in 2006, and then brought home another one, only to have it infest everything with scale.
after the busy christmas show season, i came back from halifax to a flower spike on the plant on the right, above, now almost three months in the making.   i hope that i don't kill it with excitement [the cymbidium orchid in bloom, on the left, was a valentine's gift from my mom].
did you know that vanilla is from an orchid?  i just found it here on wikipedia.

HELP! I need your orchid advice!