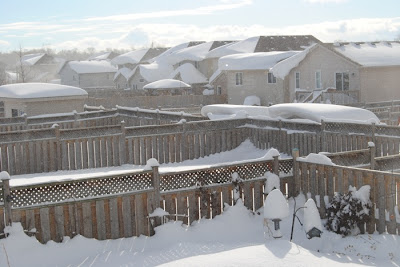 so much of it! I returned from a much needed trip to halifax very late on Tuesday, after the city of london had been getting big snow squalls for four days. the city was essentially shut down - schools, post offices, shops, airport, everything closed for three whole days. it was unbelievable, there was nothing when I left on friday, and nothing about a half hour past the city. my flight got into toronto, everything flying to london was cancelled or re-routed, so i took a shuttle to london. there was no snow at all until we hit about ingersoll, and then it built up to over 3 feet in london, which meant massive show drifts and terrible roads. my taxi home from the bus depot [ted had shovelled the drive four times that day, and was snowed in again] got stuck, and luckily another taxi stopped to help us get it out. as someone who didn't have to shovel much of it, I thought it was beautiful, with the drifts dramatically hanging out over roofs and eaves. 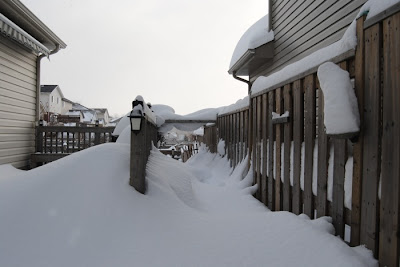 my parent's yard, with the seven foot tall fences.

It is insane how much snow London got, especially since there was very little warning!

Glad to hear you made your trip safely!