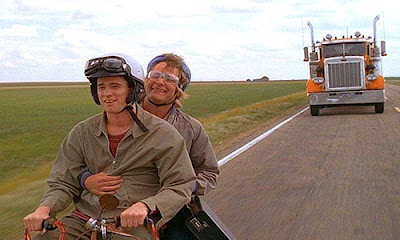 in preparation for next week's road trip, we took the car to our mechanic, Sam, to have a look at it. my mom was in our neighbourhood on Friday, and went with ted to drop of our car, and then brought him back home. after she left, it started snowing.

a few hours later, Sam called to tell us everything looked good, and to come pick up the car. so, we hopped onto the scooter, which only I have a license for, meaning that ted sits behind me and holds on. it is a little scooter, so we are a bit comical on it, which I mostly forget since it was our only vehicle for almost five years. we froze all the way to Sam's, and when we got there ted was met with much laughter by the guys there, comparing us to that scene in Dumb and Dumber, where they are frozen and stuck together on a tiny scooter [which I mercifully couldn't find a photo of]. I just dropped him off, so i missed the whole embarrassing scene.