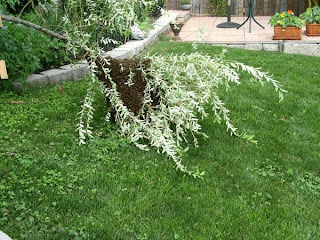 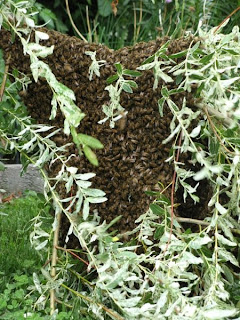 my mom called me in a panic just before dinner, telling me that there were thousands and thousands of hairy wasps or bees weighing down a tree branch.  she was so excited about it, that i went right over - it's not the kind of things you see everyday. 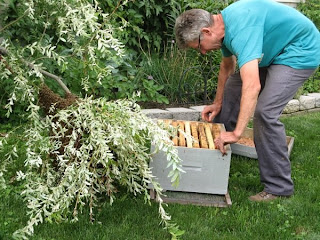 we figured out that they were indeed honeybees, and so we called Dave's Apiary down the road, and sure enough he was missing a swarm.  he explained that they usually swarm in the spring, about may when the weather warms up, but because it had been so cool, and then warm today, they were a little confused.  anyway, he was glad to hear from us, as he had tried to follow them when they swarmed, but lost them. 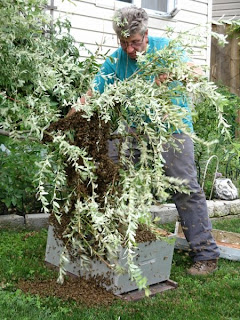 he brought out a bee box, and then picked the branch up and shook it into the box [we were amazed!] hoping to get the queen in there, so that the workers would follow. 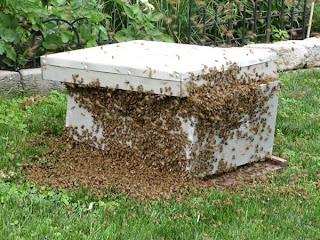 they did, and he went home 'til dusk, when he said that he;d be back to collect them once they'd calmed down.  we asked him about the fact that he wasn't wearing any protective gear, and he told us that when bees prepare to swarm, they gorge on honey, and then they are so full that they can't bend, and they need to be able to bend to sting you. 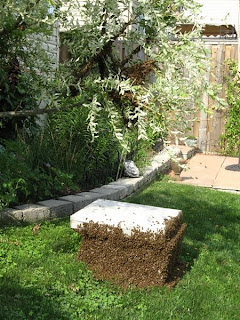 the tree branch, relieved of about 20,000 bees, according to Dave. 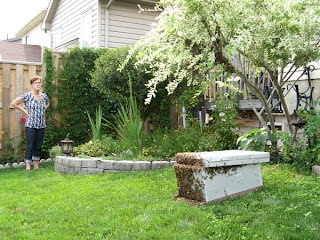 we watched them all crawling in, there were just so many.

and here is a link to the eddie izzard bit about beekeepers:
"covered in beeees!"

oh how exciting - thanks for the photos - he's so brave even it doesn't think they will sting.

What an amazing story! Makes me want to look up "bee swarming" on wikipedia.
P.S. I love that Eddie Izzard bit, he's so great!

ro, that is CRAZY! and the pictures are so great.